This website contains promotional content and is intended for Healthcare Professionals based in the United Kingdom only.

AUBAGIO is indicated for the treatment of adult patients and paediatric patients aged 10 years and older with relapsing remitting multiple sclerosis (RRMS).1

At 9 years in TEMSO, patients taking AUBAGIO were only experiencing ~1 relapse every 6 years (annualised relapse rate with up to 7 years of extension treatment was 0.171 for the AUBAGIO/AUBAGIO group vs. 0.177 for the placebo/AUBAGIO group).4

In a post-hoc analysis of TEMSO, AUBAGIO significantly decreases the rate of cognitive decline vs. placebo (p=0.0435, absolute risk reduction= -0.09 improvement in the PASAT-3 Z-score at week 96 vs. placebo).5

Read about the long-term treatment effect of AUBAGIO on cognitive outcomes in our clinical trial summary.

AUBAGIO has demonstrated relatively stable Extended Disability Status Scale (Disability progression was defined as an increase from baseline of at least 1.0 points in the EDSS score (or at least 0.5 points for patients with a baseline EDSS score >5.5) that persisted for at least 12 weeks) scores of ≤2.5 over 9 years vs. baseline in the TEMSO extension trial.4

AUBAGIO significantly slowed brain volume loss vs. placebo at both year 1 and 2 of the TEMSO study (post-hoc analysis).6

Read more about the impact of brain volume loss on cognition.

In a post-hoc analysis, those originally randomised to AUBAGIO had a significantly reduced risk of confirmed disability progression vs. delayed initiation after 48 weeks of placebo (p=0.0495, relative risk reduction= ~26.7% vs. ~30.2% respectively).7

*Patients completing the core TOWER study were eligible to enter an open-label extension, in which those originally randomised to AUBAGIO continued treatment (early treatment) and those previously receiving placebo switched to AUBAGIO (delayed treatment). TOWER ended 48 weeks after the last patient was randomised.

For patients without additional risk factors* the liver monitoring requirements for AUBAGIO have been updated and now mean that liver enzymes should be assessed every 4 weeks, instead of every 2 weeks.

* Consider additional monitoring when AUBAGIO is given in patients with pre-existing liver disorders, given with other potentially hepatotoxic drugs or as indicated by clinical signs and symptoms such as unexplained nausea, vomiting, abdominal pain, fatigue, anorexia, or jaundice and/or dark urine.

Liver enzymes should be assessed every two weeks during the first 6 months of treatment, and at least every 8 weeks thereafter for at least 2 years from initiation of treatment. 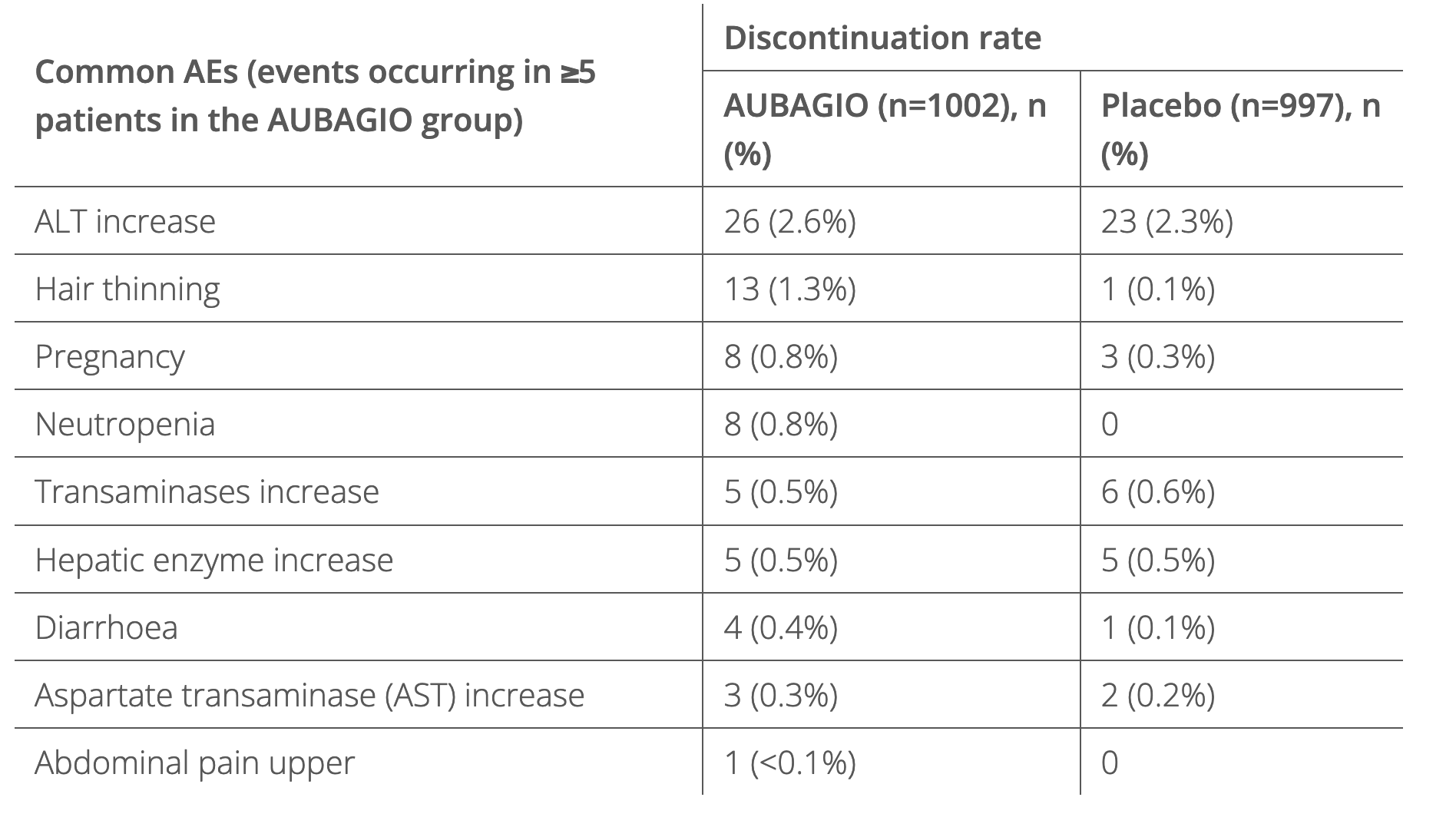 In the AUBAGIO group:

Understanding the AUBAGIO mechanism of action

Although the mechanism by which AUBAGIO exerts its therapeutic effect in MS is not completely understood, it is thought to selectively and reversibly reduce the number of activated lymphocytes in the central nervous system. This results in lower numbers of both B-cells and T-cells, two types of white blood cell involved in the nervous system damage associated with MS.1

YOU ARE NOW LEAVING THE SANOFI CAMPUS UK WEBSITE

You are going to a website that is not operated by Sanofi. Sanofi has no control over the content or availability of linked sites or resources, and accepts no liability or responsibility for them or for any loss or damage that may arise from your use of them. Please ensure that you read the legal and privacy policy sections of any third-party site to which you link.